YesSql 3 is here! Check out our current post to see what's new in YesSql, but first, read the new Liquid Widget guide and get to know why do the community needed to delete the Liquid Page and the Liquid Widget from the Blog and Agency recipes!

This is from a security report that if you have access to the admin, you can use and write in the LiquidPart. By using LiquidPart you can write HTML and JavaScript. It sounds obvious, but some sites don't expect users to be able to edit JavaScript on their pages, and it might have an issue. Because if you can write JavaScript, you can write XSS.

The solution here is to remove the Liquid Page content type and Liquid Widget from the Blog and the Agency recipe. But the part is still there, and you can use it. And the Edit content types permission is marked as Security Critical. Meaning that, if you allow this permission to users, you let them be able to also use the LiquidPart and create some custom types that are about to render JavaScript in the frontend.

As we mentioned previously, the Liquid Widgets from the default recipes were just removed. But that content type served as a very good example of how you can work with Liquid in Orchard Core. To have an example for working with Liquid, you will now find a new guide in the documentation about how to build a new Liquid Widget. Sometimes not having a feature but documenting how to use something is better than having a feature and no documentation about it.

Did you know that our Helpful Extensions module for Orchard Core contains a Liquid Widget too, that adds Liquid code editing and rendering capabilities? Check out that repository for more goodies like the content definition code generation or the flows helpful extensions and many more!

Use nameof for action name whenever it's possible

Any controller action name that doesn't change can be called by using the nameof expression of C#. Now you won't break anything if you change the name of a method during some refactoring. 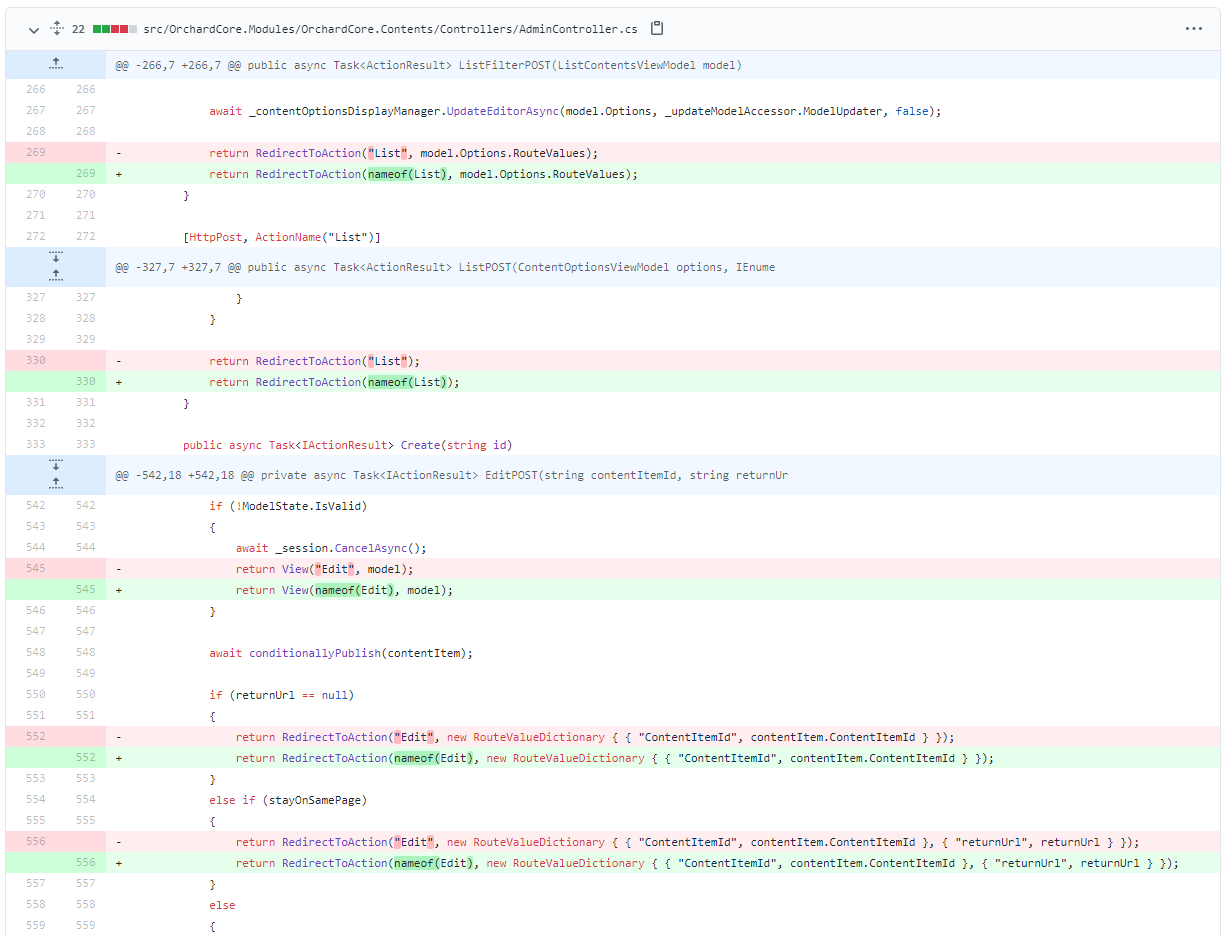 Calls to IContentManager.GetAsync(string contentItemId, VersionOptions options) use IContentManagerSession.RecallPublishedItemId() to retrieve an already loaded content item if the request is to get a published item. The same could be used in GetAsync(IEnumerable<string> contentItemIds, bool latest = false) (i.e., the overload accepting multiple IDs).

And the fix is here! When you do some loads with the content manager and if the content items are already have been loaded previously in the same request, there is no query that needs to be issued or just for the items that are missing. 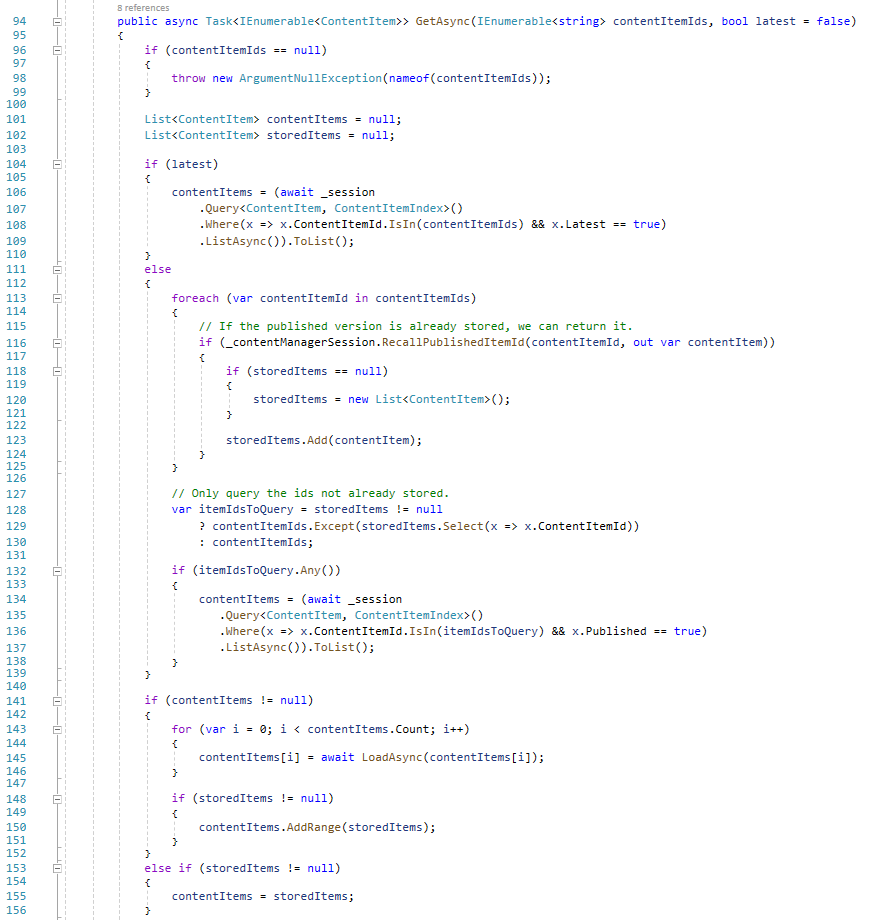 The second change is that if you really want to decide when the transaction should be created and not to wait for it to be automatically created. You can now call BeginTransaction and that will create a transaction or return the existing one if one is still open. And then there is another property (CurrentTransaction) that gives you either the existing transaction or NULL if there is no transaction.

Everything has been renamed from CommitAsync to SaveChangesAsync. It's like in Entity Framework and now it's more obvious to know what it does (saves the changes). And what it means is that at that point if there is a transaction it will be committed and then released. If there is no transaction, it's just do nothing.

And there is still the AutoFlush, meaning if you do some updates and then do a query to get some data, it will flush the changes from the database without committing a transaction, but your next request will be able to read the values that aren't in the database.

Something that you can't do with YesSql before is let's say you start creating a session and there is an exception in the middle. If you didn't do a try-catch, and call CANCEL on the catch, it would commit the transaction because disposing of the session was committing the changes. In ASP.NET we don't have this issue because there is a rule that catches any exception that happens anywhere in the pipeline. But in some other apps, if you forget a try-catch, it would commit the changes even if it didn't go over the full list of commands that you want to execute. That was a big issue in YesSql. So, now that's actually changed. Meaning that if you don't call SaveChangesAsync now, it won't save anything. You have to call SaveChangesAsync at some point to commit the transaction. And if you disposing the session before calling SaveChangesAsync, it will cancel the transaction if it exists and closes the connection. So, SaveChangesAsync is now mandatory to mimic the EF behavior. 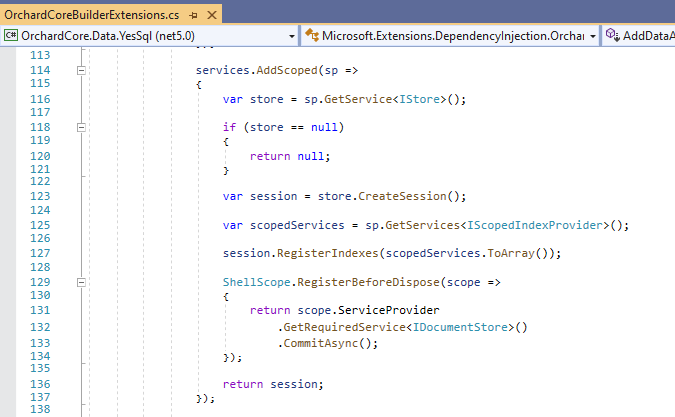 So, if you have modules that use the session, you need now to call SaveChangesAsync, otherwise, nothing will be saved. But you should not have any module that calls SaveChangesAsync.

And that's not all! If you would like to know every new feature and performance improvement included in YesSql 3, don't forget to check out the following recording on YouTube!

Lombiq's Orchard Dojo Newsletter has 199 subscribers! We have started this newsletter to inform the community around Orchard with the latest news about the platform. By subscribing to this newsletter, you will get an e-mail whenever a new post is published to Orchard Dojo, including This week in Orchard of course.